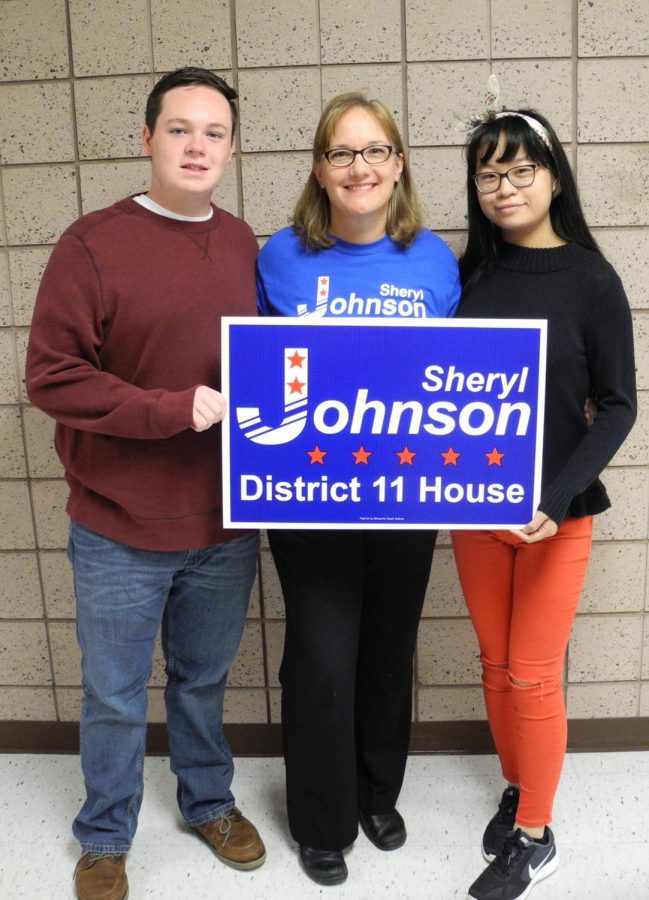 The largest high school in South Dakota, Roosevelt High School, is in full swing; and, with the help of two dedicated students, a faculty member is striving to make a change in the community. Sheryl Johnson, School Store Manager, is currently in the midst of her campaign for South Dakota House Representative in District 11. Seniors Engie Wong and Jack Brenneman are active participants in the Young Elected Legislative Leaders (YELL) Fellows Program, and are acting as “co-campaign managers” in the words of Johnson, assisting her with canvassing, social media, lit drops and other campaign projects that help spread the word about her and her ideals.

When asked how they heard about this enriching program, Engie Wong, active debate member and co-president of the Young Dems Club (Young Democrats Club), replied, “YELL is actually an event that happens once a year that’s hosted in Pierre.” Continuing, she explained, “I went to that my freshman year, and I went this past year [junior year], and there we were really encouraged to pursue the YELL Fellows Program.” In response to how she heard about Pierre’s event, Wong informed me that, “The event our freshman year was when the Young Dems Club was still run by CJ [Christopher Irsfeld] and Shikar [Kumar] and Max [Hawkins], and they all encouraged people to go, and so we had a group of about eight to nine Roosevelt students who went.”

On the other hand, Jack Brenneman, president of the Political Discussions Club, said, “I actually heard about it from Engie, and then we talked to Sheryl together about working on her campaign,” during their junior year of high school. Clearly, the conversation went well since the duo is currently collaborating on Sheryl Johnson’s campaign.

Both of these young politicians can agree that the YELL Fellows Program is a rewarding and worthwhile opportunity. Brenneman stated, “I think the experience you gain in a potential career field, whether it be political science or public policy or public speaking (things like that)–you gain lots of experience in the YELL Fellows Program that you wouldn’t get from some other jobs that high schoolers tend to work. And, I really liked that aspect of it.”

Whereas Brenneman recognizes YELL as beneficial in the future, Wong points out that the program is equally as beneficial in the now, “I think it’s pretty cool that as a high schooler I can participate in a paid internship–especially in terms of something that I am interested in [and] not just work at retail (which is my other job right now). But, not only that, it’s been able to see that I am able to make change even if I previously thought that I’m not old enough to vote by this year’s election, so I felt that there was very little I could do. But, on the local grassroots campaign of someone who’s signed up only to run in this January and who is now transitioning to try to get herself into Pierre, I think Sheryl has given me an opportunity to work closely with the Democratic process at a level I never got to see through debate, for example.” Due to this, neither student hesitated to proclaim that they would recommend the program to any student interested in politics.

However, the average Roosevelt student is not as excited about politics as Brenneman and Wong. When a sampling of the Roosevelt student body was randomly selected and polled on Wednesday, September 26, the most common words to describe feelings about politics included confusing, annoying, argumentative and even dumb. If that’s the case, why would people get involved in the first place?

Sheryl Johnson took negative emotions similar to those of the Roosevelt student body and turned them into fuel for her campaign: “I was very frustrated after the last election. I just feel South Dakota–the people that are representing us are just–it’s very one-sided. Republicans only represent about forty percent of the registered voters in South Dakota, but they make up eighty percent of the legislature. And, women only make up about twenty percent of legislature, and we’re over fifty percent of the population, so I just thought we needed a more balanced legislature. I wasn’t real thrilled with some of the things they had done the last session. I was not happy that they overturned the anti-corruption bill. I was not happy with all the anti-muslim, anti-gay stuff that was coming out. I just thought that that’s not who South Dakota is.”

Furthermore, as a mother of four daughters who graduated from Roosevelt, Sheryl added that, “I’ve always taught my daughters that if you don’t like something, you work to change it instead of just complaining. So, I thought, ‘Well, I better practice what I preach and get out there and try it.’”

From a point of view sympathetic to that of his peers, Jack Brenneman remarked, “I think sometimes as a high schooler you can feel as if politics don’t matter because you don’t have a voice, and you don’t have a vote necessarily, but I think that’s almost the reason that you should get involved in politics. Because you can’t vote, it’s your duty to then stand up for those who can and work with those who can to make the changes that you want to see in the world.”

Representing the relatively small percentage of Roosevelt students who are involved in political clubs and politically associated activities, Engie Wong stated, “I think that my experience with debate has made me more cynical about politics but, at the same time, view things on a more micro level. The change that I can make within my own community has become more present in the face of bigger political issues that we face on a national level.”

Since Sheryl Johnson made the decision to cause change in her community for the better by running for House, she has to be prepared to convince others that she is the lady for the job. When asked about what her first goal in office would be, her answer came quickly: “My first goal is going to be to make education a priority. I think so often education gets shifted; it’s like leftover money. I don’t think they realize the importance of education in growing our state for a better future. I just think everything builds off of education, so that’s going to be a huge priority. I also would like to focus on cleaning up our waterways like the Big Sioux River. There’s a lot of upstream companies and farms that let runoff go into the rivers–they let chemicals wash into the river, and that’s not good for anybody. And then it comes downstream, and then we, in Sioux Falls, have to pay to clean that up. And, I don’t think we should. I think they should either not put it in the river or clean it up first.”

Brenneman is wholeheartedly supportive of her primary goal as he said, “Education is something that is super important to all high schoolers (I would hope–being as they are the current education system). I think that, coming from someone who works with students on a day in and day out basis, she has a better understanding than most candidates would, and I think that is the thing that drew me the most to Sheryl’s platform,” when asked about which aspect of Sheryl Johnson’s campaign he liked most.

“She has a lot of care and love for the school system, and education is something that I think is underrepresented in Pierre today,” Engie Wong observed, which agrees with Brenneman’s beliefs.

Additionally, Sheryl Johnson plans to surpass any obstacles in her way, “I’m sure I will get a lot of people telling me what I’m doing wrong–a lot of complaints. I’m just going to do the best I can. I’m sure that I will be frustrated, that I will want to get things done, and I’ll have to compromise with people that don’t see eye to eye with me. And so, I maybe won’t get my way all the time–I’m sure in fact I won’t–a lot of it will depend on if it gets to be more of a balance or if it’s still very heavy Republican.”

She also plans to gain support through her relatability, “I think I can relate to a lot of different people. I am a mother of four daughters–they’ve all gone through Roosevelt High School. I’ve always been very involved in the education system. I was a volunteer at classes. I work here. I hear a lot about student issues and what they’re concerned about. I’ve been a working mom. I’ve spent some time as a stay at home mom. I’ve run a few different businesses throughout my life, so I kind of know the business person side of it. And then I also was a military wife; my husband was deployed during the Gulf War, and so I was a single parent for about eight months while he was deployed.” Concluding, she reaffirmed, “I just feel like I can see a lot of different people’s viewpoints and relate to them.”

For these reasons, Sheryl Johnson, a self-proclaimed “optimistic” person, wants readers to know that they can contact her through her Twitter (@sheryl4SD), Facebook (facebook.com/Sheryl4SouthDakota) or email ([email protected]) with any questions.

As such, regardless of which political party Sioux Falls’ residents support, it is inspiring to see two young people working alongside a political candidate for a better future. The story of these Roosevelt members serves as a reminder for people to be involved in their community. As Engie Wong asserted, “Turn them [ambitions] into actions rather than just ideas.”