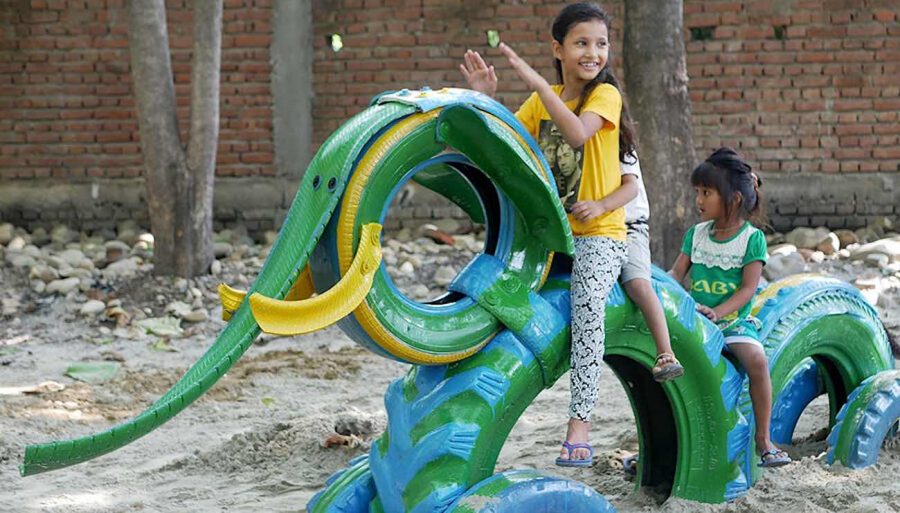 A non profit organization named Anthill Creations run by Pooja Rai. This organization all started when Rai went with a friend to donate food at an orphanage. Rai was shocked in sadness when she observed kids playing with trash. For example, the kids would play with dangerous pipes and use them as swords and they also used old shoes that they used for rackets. Rai decided that she wanted to make a change for the kids and  the better.

Rai decided to start her organization by asking friends for donations to get equipment for a playground, but then she brainstormed a way better idea. She decided that she was gonna use old tires for a playground. This idea is very beneficial for the environment because over 100 million old tires are thrown away every year in India. Rai started by creating tire swings, jungle gyms, tunnels, and sculptures out of colored tires! It helps a lot that Rai was an architecture student because she knew how everything could be created and manufactured.

This amazing woman said a quote that is very eye opening for everyone in our world today. She states that “play shouldn’t just be part of a rich, privileged kids lifestyle.” It’s important to realize that not every kid gets a nice playground at schools around America and across the world. Having someone care about kids’ growth and imagination is inspiring and we need more of that. Not only did Rai create 275 different playgrounds out of tires but she also created more playgrounds out of tires for refugee camps and for blind kids as well. In conclusion this organization has created light in a world that has been negatively impacted lately.