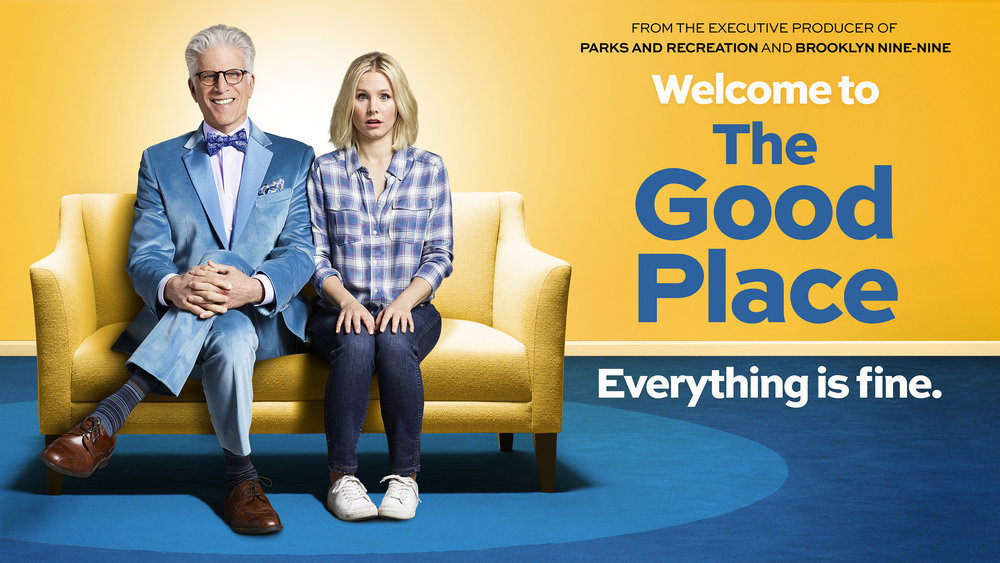 A complete rating of “The Good Place”

“The Good Place” is a philosophical comedy that shines with creative originality and jittery drama that disallows a boring experience whilst watching the show.

While popular sitcoms like “Friends” or “The Big Bang Theory” achieved popularity and acclaim by ignoring their plot holes and focusing on wacky storylines and unrealistic character arcs, “The Good Place” takes a shocking step in the opposite direction when it’s revealed in the first thirty seconds of the show that all the characters who have an impact in this story are dead.

Sound depressing? That’s why the director tries to prevent this through special effects. As cheerful music plays in the background and bright lighting takes center stage, it creates a little confusion while the viewer tries to comprehend the fact that this show takes place in the afterlife. Then writing skill takes the steering wheel from the music and lighting and crashes into our funny bones.

Michael, the introducer of the afterlife, explains how “correct” the various religions were on their views of the afterlife (whether there’s a heaven or hell) in response to a question asked by Eleanor Shellstrop, our main protagonist. He expresses that all religions were about five percent correct (which smartly avoided triggering religious extremists). However, a frat kid named Doug got high and got 92 percent of the concept of the afterlife correct; this was reinforced by a frame of an idiotic looking college kid hanging in Michael’s office to honor his predictions.

“The Good Place” if one couldn’t tell, is — well — the good place of the afterlife, where each resident spends eternity in harmony with every slight detail carefully accounted for to make their stay in The Good Place the most perfect one imaginable. Eleanor, along with three other dynamic characters (Chidi, Tahani and Jianyu) are all in this location, and we get to see a glimpse of Michael Schur’s (the creator of the show) take on heaven, and it’s delightful. The conflict arises once Eleanor figures out that she was brought there by mistake and actually belongs in “The Bad Place” where others are spending life in eternal damnation.

And that’s not even the conflict.

As the story progresses, the characters develop, and the actual situation of the afterlife unravels deeper and deeper until we have people jumping in and out of wormholes to avoid ten foot frogs and flying pieces of shrimp; I’m dead serious; this actually happens in the show.

With that out of the way, let’s go over the categories to make “The Good Place”’s score as accurate as can be by putting it into the five most important categories for determining how “good” a TV show is.

The show will be rated from one to ten in five categories. Using five as an average basis in our categories, a score of 25 for a TV show would be purely average. Anything below that score is below average, and anything above that score is above average. Here’s how we’ll sort the final scores.

44.0-49.9: Gloriously Remarkable and Outstandingly Impressive — This level is for the show of the decade. A story with compelling and in-depth characters, a thought-gripping plot and a colossal and meaningful conflict belongs on this level; there are very few who can make it here.

Now that we have our rating levels assorted, let’s get to our five categories. Each of these five holds a true and accurate representation of how “good” a show may be, and, since ratings can only be so lengthy, I chose the five best ways (in my opinion) to rate a show to make the final score as precise and correct as possible.

Uniqueness: 8.7 — The concept of the afterlife is still farily new in the entertainment scene, so it was refreshing to see a fresh angle to the unknown “life-after-death” idea. However, there are dozens of movies (such as “Beetlejuice”, “Charlie St. Cloud”, “Heaven can wait”, etc.) that have used the idea of the afterlife as either a main plot or a conflict, and the plot relates heavily to Christianity’s Heaven and Hell.

Character Impact: 5.4 — The character impact for a show with this type of critical acclaim is barely above average.  Every important accomplishment and noticeable growth achieved by our characters is taken away repeatedly by having them relive their lives. The rating would be lower if the goal of our cast wasn’t to accomplish something as great as changing the world for the greater good.

Relatability: 8.9 — Although we can’t necessarily relate to death itself since we’re all alive, we have all probably had loved ones and close friends lose their lives, and we’ve probably witnessed celebrities and musical artists whom we loved and were inspired by pass away; this caused us to feel emotionally affected. Although our characters live in an afterlife that we haven’t been to, we relate to them on a deeply emotional level since they all have the conscience in their heads that begs them to do good actions in their world; this is an ability that everyone possesses, thus making it heavily relatable.

Unpredictability: 7.6 — It might be hard to predict what will happen next in the story of “The Good Place” because the plot is so original, but if the viewer actually thinks about it, the conflict has to come from somewhere, and it’s pretty simple to detect where it’s going to come from when taking in the bigger picture of the story. However, the plot twists are strong in this show, and it often restrains boredom from crossing our minds.

Creativity: 6.7 — After riding on the coattails of the afterlife concept for the first couple of seasons, the show’s (somewhat) lack of creativity seeps through the cracks of its “originality” barrier. Several conflicts are revisited as the writers seem to be running out of ideas, and the plot holes grow more severe.

“The Good Place” succeeds in falling into the Exceptional level on the scale, well where it belongs. If we were to rate the show solely based on its first season, we would’ve seen a much higher score. However, as the story develops, it creates a more challenging test to the writers to keep the story imaginative and original, and that’s where it dropped off. The character impact was sacrificed for the sake of the plot, which isn’t necessarily a bad thing, but it creates a visible negative in the show and should’ve been addressed with more clarity.

All criticism aside, this show is truly exceptional and heavily binge worthy. The first two seasons are on Netflix while the third season can be viewed on NBC. The show is still releasing new episodes on Thursdays at 7:30 p.m., so be sure to give it a view and see for yourself if the show deserves my rating.