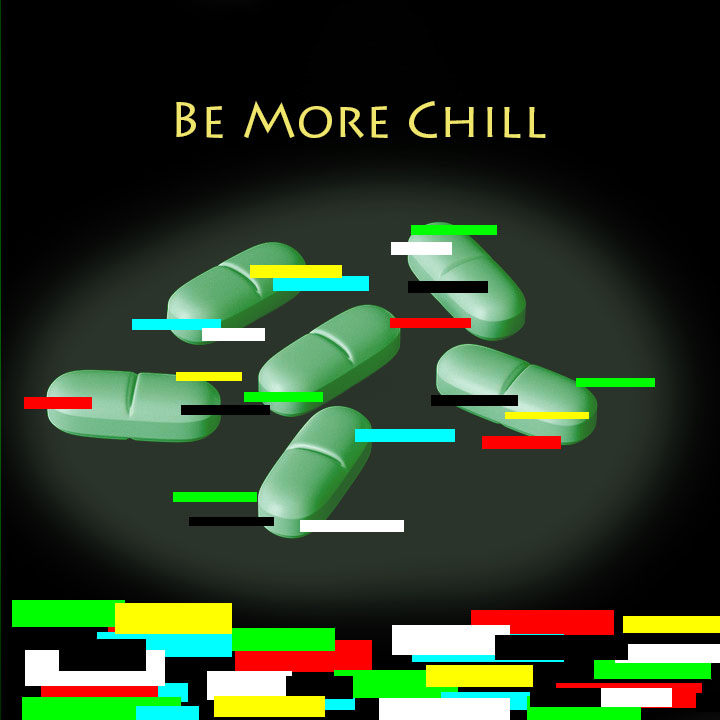 It’s Time to Be More Chill

Everyone is familiar with all sorts of entertainment but musicals tend to stand out. Five performances that are popular with typical teenagers are Hamilton, Dear Evan Hansen, Heathers, Mean Girls, and Be More Chill. One of these productions stands out from the rest, Be More Chill.

Be More Chill is a sci-fi comedy that centers around Jeremy Heere, a high school junior who is a complete loser. He gets a supercomputer pill called a Squip who teaches him to be popular and cool. This is so he can get his crush, Christine.

There have been multiple stage productions of Be More Chill but we will be focusing on the Original Two River Theatre Cast and the Original Broadway Cast collectively. Both casts have their own interpretations but remain still comparable to each other.

Starting off, one of the things to consider is the music style of the musical for that’s its main component. It has a pop rock score with some techno type instrumentals. You can see that fairly prominently in the song “Two-Player Game.”

The songs in the soundtrack can be really entertaining and relatable to most high schoolers. Some examples of this are “A Guy That I’d Kinda Be Into,” “Loser Geek Whatever,” and “Michael in the Bathroom.” The vocals accompanying these songs are very smooth and real. Additionally, some of the songs are just bops to listen to.

Depending on the album, you can either get Jeremy sounding pretty awkward or just slightly weird. The Squip can also sound either like Keanu Reeves from Bill and Ted or serious and dominating. This allows you to take your pick which is great if you feel like listening to the other album.

Just listening to the album can give you a pretty good idea on what is going on without needing to see the show live. Some other shows can be harder to understand if there isn’t extra context such as Dear Evan Hansen so that makes Be More Chill a pretty good place to start.

Another point to look at is the characters and the actors who play them. The cast is diverse and full of different types of people who attack about all of high school’s social ladder, it goes from popular jock guy to a sweet theatre girl or to an uncool loser.

Each character’s desires is also explained, mostly to be noticed and to not be in the position they’ve been set into. You can see some character development over the course of the story and relationships being made or evolved.

The actors at points overplay the characters as the show is pretty campy. The choreography matches up and is entertaining to watch. One that stands out is around the end at the song “The Pitiful Children” which shows the coordination needed to show Jeremy’s reaction to the Squip’s proposal.

Humor is a key component for Be More Chill as it is a high school comedy. True to its word, it has some fairly high school typical humor mostly diving into the sexual type. This can be a double-edged sword as it really depends on each individual’s sense of humor is. There is also a lot of quotable moments that will be ingrained in your memory by the end of it.

Lastly, there’s the set to look at. Focusing on the Broadway version, the set and stage looks amazing. It’s infused with technology and is changeable during the musical. It’s also very variable between each scene. The different lighting also sets the mood quite well, too.

Overall, Be More Chill is a great musical for teens and young adults. Although, it isn’t really set out for those who are older. The music is catchy, the set is awe inspiring, the humor is funny but not for everyone and the actors do an excellent job of the characters.