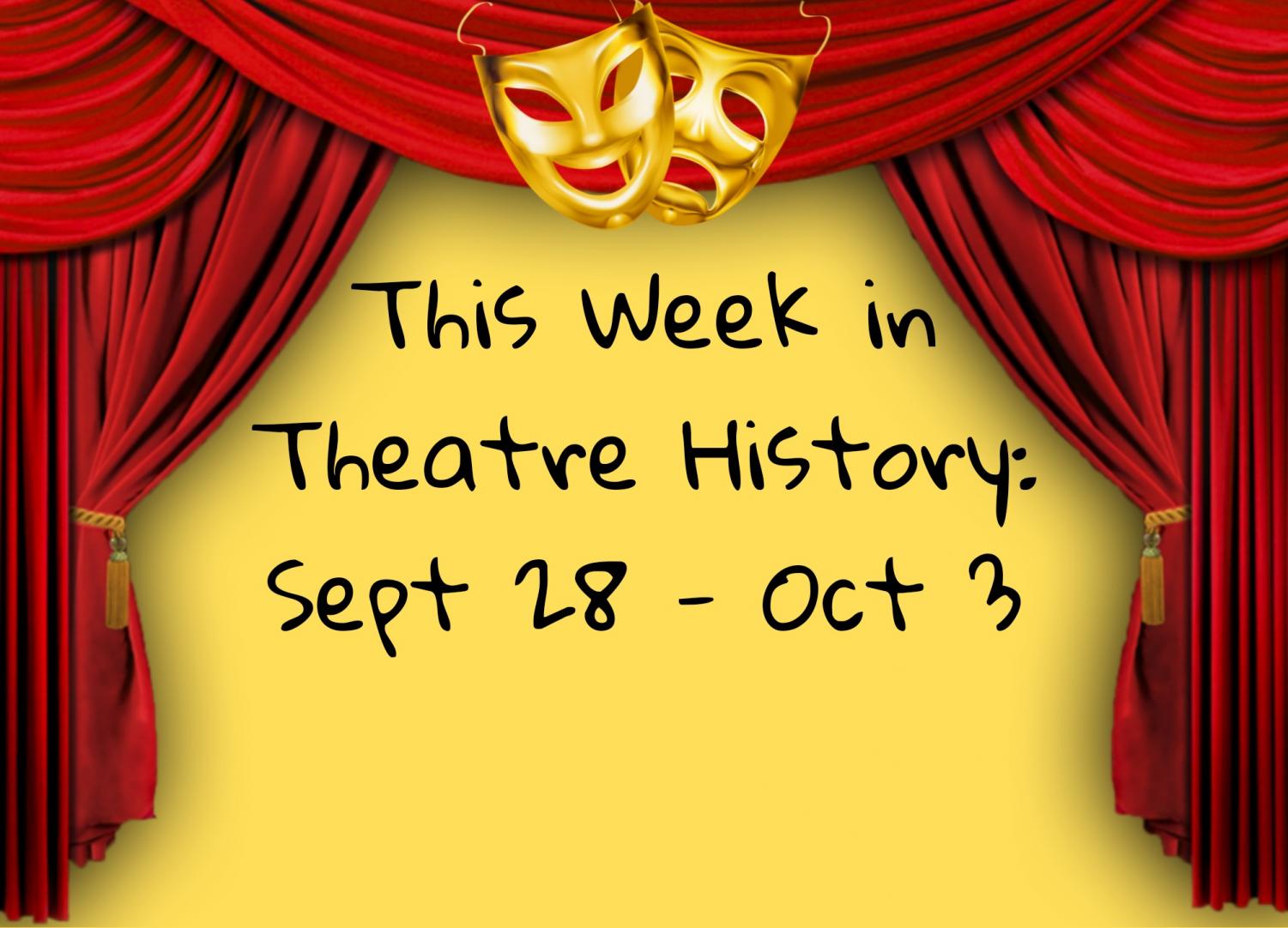 This Week in Theatre History : Sept 28 to Oct 3

For this week in theatre history, peek at some lovely events that have happened in the past century. In this edition, there will be deaths, births, and debuts of stars along with the openings of shows and a brand new Broadway theater.

Beginning with September 28, 2014, the third revival of “You Can’t Take It with You” premiered. It originally opened on Broadway in 1936 going on for 838 performances, and in 1938 the show was adapted to the screen. “You Can’t Take It with You” follows the story of a rather odd family in New York and their misadventures. The cast included stars like James Earl Jones, Annaleigh Ashford, and Elizabeth Ashley.

Next on September 29, 2001, actress Gloria Foster passed away in New York due to diabetes. She was popular for playing classical roles in theater such as Medea, Titania, and Clytemnestra. Foster also played roles in “Law & Order” and as the oracle for “The Matrix” and “The Matrix Reloaded”. Additionally, Foster occupied roles in shows such as “A Raisin in the Sun” and “In White America”.

Following on September 30, 2002, Billy Joel made his Broadway debut in “Movin’ Out” which is a jukebox musical of Billy Joel’s songs combined with choreography by Twyla Tharp. “Movin’ Out” lasted for three years at the Richards Rodgers Theatre until December 2005. During the 2003 Tonys, Joel won a Tony Award for his orchestrations while Tharp won one for choreography. The cast was also nominated for 7 additional awards.

Heading into the new month on October 1, 1935, Julie Andrews was born who is best known for starring in “Mary Poppins” and “The Sound of Music”. While Andrews is well known for her films, she also acted on stage in “My Fair Lady”, “Camelot”, and “Victor/Victoria”. She has won many awards for her outstanding performances from Golden Globes, Emmys, and Grammys. Currently, Andrews has been lending her voice for films from “Shrek” to “Aquaman”.

Then for October 2, 2003, “Little Shop of Horrors” made its debut on Broadway. Previously, “Little Shop” had been Off-Broadway in 1982 then on West End in 1983 right before the film version was created starring Rick Moranis. The story follows a florist shop worker who grows a plant that feeds on humans. The horror musical was a large hit after expanding some of the songs and adjusting the initial cast. Despite its success, “Little Shop” closed down the next year.

Lastly on October 3, 1918, the Selwyn Theatre opened by first being used for dramatic productions such as “Tartuffe”, “The Importance of Being Earnest”, and “All My Sons”. Later the theatre was converted for film use from the 30s to the 50s. Eventually, the Selwyn Theatre decayed in the 90s and was renovated from 1997 to 2000 to its former glory of housing dramatic productions. Its name was changed to the American Airlines Theatre in honor of its main sponsor.