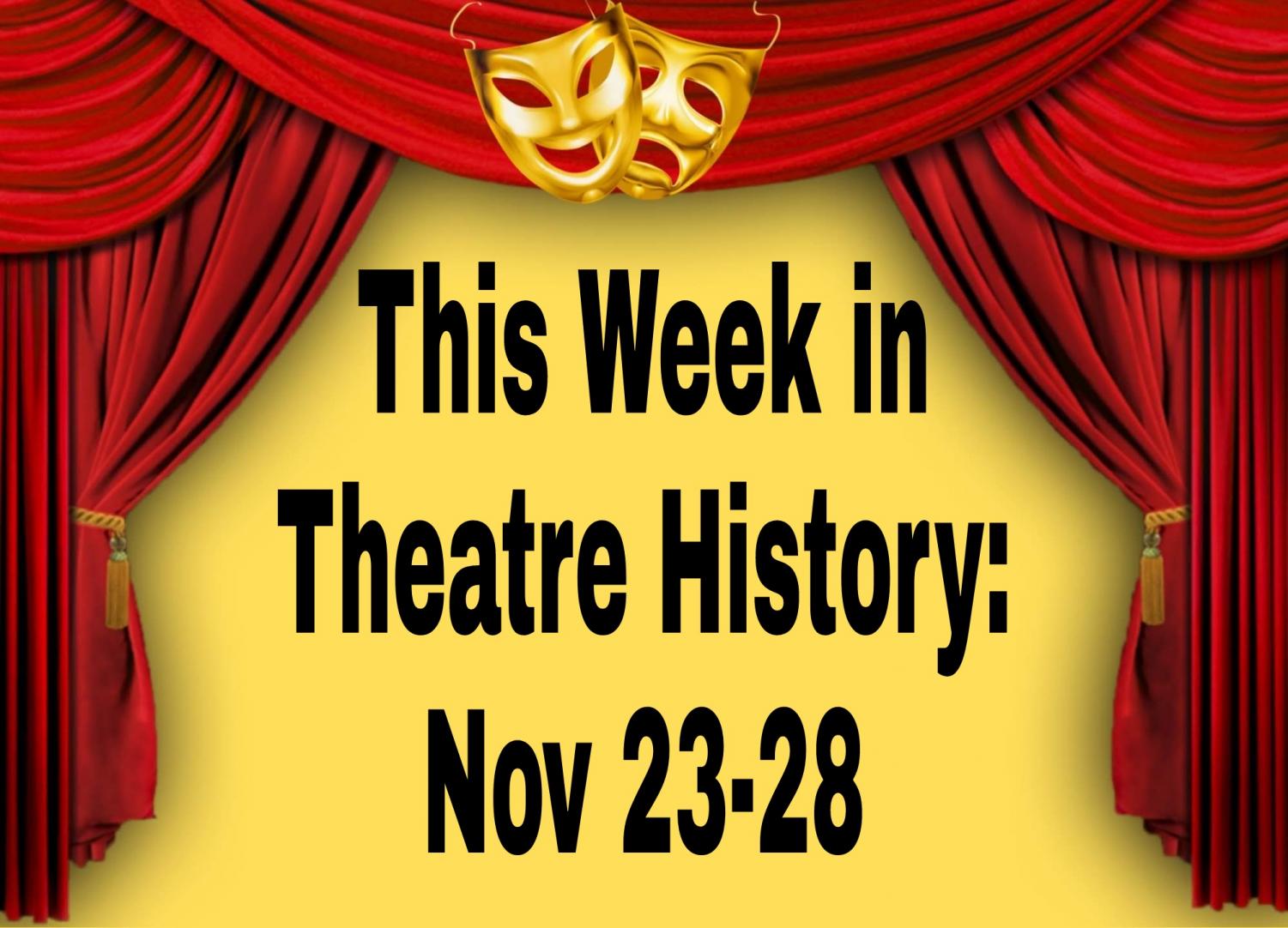 This Week in Theatre History: November 23-28

As we step into the holiday season, during this week in theatre history there was the premiere of a play adaptation of a classic novel, a visit from Queen Elizabeth II to see the 50th anniversary of a play, and the opening of Sunday shows on Broadway.

First up on November 23, 1937 John Steinbeck’s novel “Of Mice and Men” was adapted into a play at the Music Box Theatre. While predating the Tony Awards and Drama Desk Awards, “Of Mice and Men” won the 1938 NY Drama Critics’ Circle Best Play. The play generally follows the novel except for the portrayal of Curley’s Wife as being represented as lonely. The original production had the main characters George and Lennie played by Wallace Ford and Broderick Crawford. In 1939, the play transferred to Los Angeles where Wallace Ford reprised his role as George and Lon Chaney Jr. replaced Crawford as Lennie.

3 years later on November 24, 1940, mainstream theatres began showing Sunday performances. Previously, only select theatres had shows which were typically vaudeville programs. The reason for the lack of Sunday shows was due to Christian laws preventing them from occurring; however, in November 1940, actors argued for these performances and when enacted, it was surprisingly well received. The following decades would only see an increase in Sunday show attendance as it made a lot of money, was applicable to family schedules, and actors enjoyed the time on stage.

More recently on November 25, 2002, Queen Elizabeth II attended the 50th anniversary of “The Mousetrap” by Agatha Christie. The show follows a cast of characters stuck in a snow bound manor being led by Richard Attenborough and his wife. “The Mousetrap” stands as the longest uninterrupted run of theatre going over 65 years and 27,000 performances. The 50th anniversary of the show would be the first time the Queen had seen the play which opened the same year that she claimed the throne.

Diving into political plays, on November 26, 1911, Laurence Houseman’s “Pains and Penalties: The Defence of Queen Caroline” debuted at London’s Savoy Theatre. The play was based on the Pains and Penalties Bill of 1820. King George the IV, the son of the famed King George the III, wished to divorce his wife Caroline; however, that could only happen in cases of adultery. The bill was passed but withdrawn however Queen Caroline passed soon after. “Pains and Penalties” was banned and censored as it portrayed royalty in an unfavorable way which didn’t stop Houseeman from publishing his play.

On November 27, 1994, playwright Arthur Miller was appointed professor of contemporary theatre at Oxford University for one year. Professor of Contemporary Theatre is a role that has been given to several significant theatre entrepreneurs. This included lectures regarding other playwrights such as Henrik Ibsen and presenting of essays. Miller is known for being a great playwright and for his plays such as “Death of a Salesman”, “All My Sons”, and “The Crucible”. He takes parts of his own life and experiences into the work he creates.

Lastly in the spirit of Newsies on November 28, 2007, a settlement was decided to end the 19-day stagehand strike against the League of American Theatres and Producers. The International Alliance of Theatrical Stage Employees (IATSE) held a meeting regarding the collective bargaining agreement between them and the League. Disagreements over the details of the contract led to a stagehand strike which is estimated to have cost the theatre industry $40 million. Almost all Broadway shows were impacted by the lack of stagehands and when negotiations completed the strike ended peacefully for both sides.